I’ll Be There for You

The hosts asked Pope to define a relationship-based surety. It’s “a surety that’s in the business for the long haul, both in the relationship with the contractor … and the producer,” said Pope, “but also being a steady factor in the market.”

He added that the measure of success “is being able to work out a good relationship between the contractor, the surety, the field person, and the underwriter behind the scenes. It all comes down to open communication and trust.”

How do you maintain that trust in the surety relationship?

“The trust is earned by everybody,” said Pope. “The surety underwriters have to have a steady hand in what they do and how they do it and not surprise everybody with brand new information requests they’ve never asked for before. The broker needs to keep the lines of communication open, give the surety a long lead time on the next big project. And the contractor has to keep the surety informed on what’s going on and how things are developing. If everybody is meeting that level of communication, the trust is pretty easy to establish.”

What are the most difficult challenges?

“The big thing in these situations has been the communication of negative news. Everybody knows that bad news travels slower in the surety industry than good news. In this situation when there’s so much uncertainty that everyone is working around, the negative news is just as important as the positive news,” said Pope.

“It’s not that sureties can’t work past negative news or figure out how to work that issue with the contractor. We can. We do on a daily basis. The contractors who hesitate to bring that news to the front and get it dealt with are the ones who have a more difficult time keeping a long-terms relationship with a surety.”

When there is a claim, how can trust be preserved?

“The surety’s obligation is to deliver under the bond,” which “is made more or less difficult by the cooperation of the contractor in providing the information and facilitating the takeover of a project ― not spiking the situation at the end. When the contractor that can’t perform takes action that prohibits or makes it difficult for the surety to perform, it’s self-defeating.

“Cooperation is a huge component of mitigating damages of a claim,” said Pope. “One of the hallmarks of a good surety is that they have legal professionals on staff who get the overall picture, will have an open discussion with the bond principal, the owners of the company, to try to figure out a way to mitigate those damages. If the surety is handing that claim off to an outside firm in total to be handled, you don’t have that same kind of glue to stick the situation together.”

How has the pandemic affected surety?

“It’s been a challenge for everyone. It’s been a challenge for the broker, for those of us who sit in an office in a different state trying to make that connection with a contractor who needs the next bond,” said Pope. “Strong relationships have been strengthened more,” but “where there was a weaker relationship prior to COVID, there’s been a bigger hurdle to get over. You can’t sit down in the same room and talk to people. A lot of strain has been put on brokers to bridge that gap … to make sure all of that communication happens.”

Not being able to sit in the same room

“That’s a challenge that the pandemic has accelerated, but it’s not a new challenge. Companies have been migrating towards remote work,” said Pope.

“Technology has enabled communication without inflection, without body language behind it. That’s a problem for all of us, as we hire new people who have a different experience with technology, who don’t expect to rub elbows directly with their manager or coworker. What I personally find is that picking up the phone helps a lot.”

What about remote training and knowledge transfer for younger generations?

“That takes additional effort,” said Pope, who observed that formal training via Zoom calls can be problematic, “especially if it’s being recorded for posterity. Nobody’s going to ask that question that they would have asked as an aside somewhere else. Overcoming that reluctance for the whole industry is a challenge. How do we get those skills sets transferred from those of us who’ve done it for years and years to those who need to see and do it more before they’re fully autonomous and can make the best decision for a given situation? It’s something that remains ahead of us.”

Why join the surety industry?

“In 30 years, there hasn’t been a week when I didn’t learn something new,” said Pope.

Tune into the Let’s Get Surety podcast to hear more of this compelling conversation. To find out more about Old Republic Surety and contractor’s surety bonds, contact a local branch office. 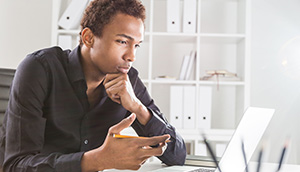